Re: PVC Puppet Stage Posted by Gail on Sep 18, 2014
Wow! This is one of your best yet, so many new ideas that I can use.  I was worried about your fingers as you held that over the fire and used that saw.  Those fingers are too talented to hurt. I have a long pair of heavy tweezers that would help you fish out that elastic, here is website with pictures.
http://www.ambercity.com/vantage-dressing-forceps-3-1-2-89-cm-v96-1-miltex.html
The flanged out connector is genius, how do you think of these things?  I am building a PVC playhouse for my new granddaughter and I am having trouble finding a certain joint, now maybe I can figure out how to use a flange there.  We used a small bungee cord with hooks around our slippery PVC pipes.
Oh and those clips are great, they are so snug.  I wonder if they could hold some light props on the stage edge, like flowers or bushes?
Re: PVC Puppet Stage Posted by pagestep007 on Sep 18, 2014
Yes Snail, you can use clips for clipping light props. We are going to use single pipe clips, not the double ones, and shorter also, to clip the cloths on, and  also clips to hang puppets on, and we did have a fold down table/platform, but they did not need it in the end. The technical rehersal generated a few little tricks. The great thing with the double clips is you use the frames, in any order or combination or angles you want, and the setup I made for these guys they just zig zag it shut and lean it against a wall out of the way after rehersal.
Yes, the heavy tweezers look good.  .. and my fingers are fine. Had them for 52 years.
Re: PVC Puppet Stage Posted by Shawn on Sep 19, 2014
Great tips in this one! Those clips are impressive. Not sure I would have the patients for the elastic joints.

It did get me to thinking about alternative ways... I wonder if you could use a wooden plug with the elastic to make it easier. Drill hole in center of two wooden plugs. Thread elastic ends through each then tie of and knot. Could also put glue on knots. So now you have two plugs with elastic between. Slide the plug into one to the same point where you drilled holes and then put in a small nail or screw. Repeat on other pipe. If you used a screw you could always take them out in order to replace the elastic.
Re: PVC Puppet Stage Posted by Chris Arveson on Sep 19, 2014
I'm a member of the pagestep007 fan club. Great engineering. The initial construction takes a bit of work, but saves so much work once the construction is complete and you are assembling and disassembling the stage.

I, too, wonder where these ideas come from, and how long it takes you to work things out to the point that you show them to us.

Shawn, I like your alteration using the wood plugs with the elastic. I don't think I could ever be coordinated enough to do all that fishing with the elastic cord. I was looking forward, in the video, to see how the last knot would be tied. Unfortunately, in that kind of situation, I have more thumbs than fingers.

.... I have more thumbs than fingers.

Me too!  That is why my brain started turning over other ideas.

I would have lost the elastic back into the tube at least 20 times I think.
Re: PVC Puppet Stage Posted by pagestep007 on Sep 20, 2014
Shawn, great thinking. I suppose the plug idea is worth trying. The reason I did not do it was that the plug´s function was to stop the tube compressing over time inside the T and elbow joints. Sliding it in further would defeat that purpose, and add weight. If you  did it at the T or elbow joint, it would work, but I wondered if you would get enough stretch in the elastic.... but it is worth trying. I will give it a go on an extra frame they want added. It is easier doing the elastics by using longer bits of elastic and trimming them, but I was too miserly and wanted to have as little waste as possible. Also maybe a piece of nylon fishing line might be better as the pull through loop thing, as it will be stiffer. I just did not remember that I had a piece in the string box. Anyhow, it is a lot of work doing all the joints, but it looks like it will be a HUGE time and brain saver over the long term. Trials will confirm that.(I am hoping you are right Chris) so far it is great. Oh, using a screw instead of a nail...yes,  good point. Once again  I was being cheap. (I am not being paid enough, and I have exceeded the expected level of effort by a factor of at least two already)A screw would be  better as you say, to replace elastics some day.
The clamps are a copy of one I saw here, except the creator of it used a small washer on one side of the rivet, and did not flatten the rivets, so they did not fit as snug. We are not sure where the idea originally came from. Not my idea, but works really well.

These ideas...there is a verse in the Bible which says that nothing is new under the sun. A lot of what I do is just using   concepts already in use. I think that many woodworkers, and engineers are disgusted by my feable attempts at entering into their  field of expertise. I am but a bush carpenter at best, and a level entry engineer, and through economic necessity have to make do with what I can find for really cheap or free. The experts have studied long and hard to gain exceptional levels of perfection in their fields but  that  is  all they do. I tend to have a little bit of knowlege in a wide range of areas, so  I  can  combine  concepts and fabricate things  to  a workable degree. But, and  many  gringos in particular  put it,  it tends to be very 'ghetto'.
Re: PVC Puppet Stage Posted by Shawn on Sep 20, 2014
I personally think "Jack of all Trades" is a very honorable title. I would challenge those "experts" to be able to survive in your environment.  That by no means discounts their worth but I consider your skills just as worthy.

Re: PVC Puppet Stage Posted by Chris Arveson on Sep 20, 2014
I second Shawn regarding Jacks-of-all-trades. Clearly you use anything, and waste nothing. I love how you pull something out of a stack from previous projects and give it a whole new use. Being low budget isn't bad, it requires far more ingenuity.
Re: PVC Puppet Stage Posted by pagestep007 on Sep 25, 2014
HI Guys, I did a few experiments with plugs and elastics. The above tutorial with elastics for each joint, was for a general joint without much regard for particular designs, but  here are a few findings for particular situations. Shawn, I tried securing the elastic into the plug before  putting into the tube. The screw is definitely a good idea,(the plugs pack a hard whack on the  knuckles if they ping out under tension without the screws

) as you can disassemble them when you want to, for repairs later on. You must be careful to countersink the screw though, so it fits into a flange if it is to go into a flange. I used some flat head screws, and also tried some little screws from old audio casette tapes. They are round headed, but work fine if you countersink them enough. 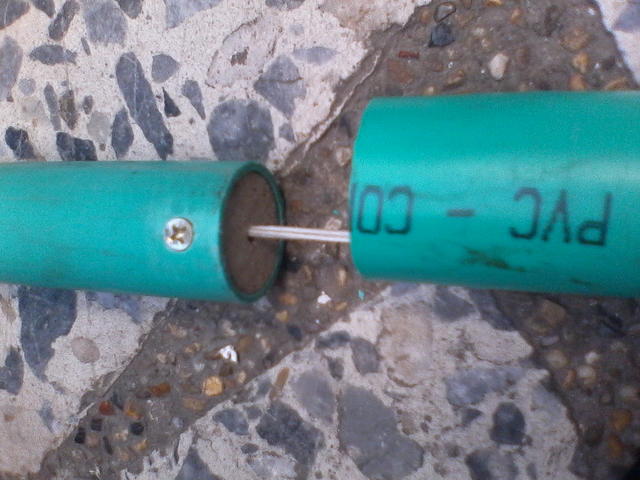 The plug in one end of the pipe, like the one to go into a flanged pipe or socket is fine, but you need some length in the elastic to give enough stretch. If you are not worried about weight, nor worried about shrinkage inside a joint, then you can do two plugs, tie your elastics through a hole in the centre of the plug, secure one into the pipe, then insert the other plug into the other pipe and with a stick, push the plug into the pipe until the tension you want is reached, marking the stick to guage where the plug reaches, or is up the pipe, then screw the plug.
I decided to put a plug into the end of the second tube which would go into a socket, so I  attached a piece of string to the elastic to economize, and went through the same process. I tied a knot in an elastic end, fed it through the second plug before screwing it, then fed the elastic through the T jointer, and attached in the usual manner.(using nylon fishing line definitely is easier to thread through holes.) 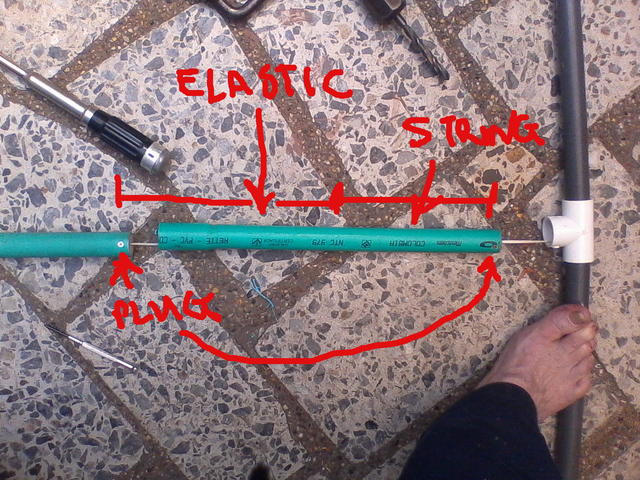 Howevcer the easiest method, was using just string and elastic, but you would have to figure out on an individual basis depending on your design, how you would arrange it and  if  you are  going to use plugs. With a rectangular frame I just tied a string, to a loop of elastic, then another string, then elastic, a few times, then threaded it through the outer frame with a stick, then pulled to tension and tied the strings togerther. Then I only had to contend with the middle crosspiece. If you are going to use plugs you need to thread the string and elastic through strategecally placed plugs with holes in their centers, or put them in later as in the video above.

I learned a few other tricks on this job, which are likely to be enough for another video.

Oh by the way Chris, I forgot to answer you question about how long it  takes to figure out things before sharing them. Some things are not my ideas, or slight adjustments on someone else´s idea, so it does not take much as it has been proven to work and adjustments are few or sure. Others are things that I have been doing repeatedly for years, so I know they work, and others are a little more untested over the long term, but I am fairly sure they work. If I am unsure, I will chew it over for a while before sharing it, or I will say that I am not sure. Occasionally I get enthusiastic and share something prematurely and it is not the best version, lacks some points or is just slack, but in such cases , if it  is really bad I will delete the  vid, or if it  is  not too monumental, do an update to add new findings, as with the above video... there is probably more stuff to find out. It´s a bit of an adventure.
Re: PVC Puppet Stage Posted by Chris Arveson on Sep 25, 2014
The adventure is part of the fun, is it not? I often find that after finding womething that works, I will share it, and then, almost immediately find an improvement that I wish I had thought of earlier. Ah well, that's part of the fun!
Loading