Eight Balls of Fur! Posted by 8BallsofFur on Oct 03, 2017
Hi! So, I'm taking this puppetry class, and for a finals project we were building some Sesame street type puppets. So, I decided I wanted to make the furballs from the song Eight Balls of Fur. Basically they are furballs with long legs and feet they dance on. The pic shows the first version, though I might see if I can find some shaggier fur. I'm really happy with how this first one came out. Hope you guys like, and if you want I'll make updates on the bigger project which is to actually recreate the video for Eight Balls of Fur. 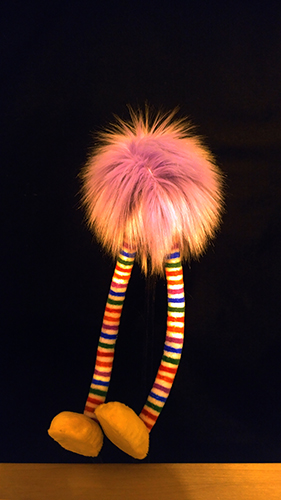 Re: Eight Balls of Fur! Posted by Gail on Oct 03, 2017
Interesting have you figured out how to make them move yet? We used fur ball puppets in the past for the "Gospel Fuzzies Song" and had a hard time figuring out how to move both head and feet. How many people would it take per puppet? We finally just used springs for arms and legs and focused on only moving the head and let the arms and feet have sympathetic movements. We were never happy with the results and wondered if we should connect all the puppets together somehow so one puppeteer could move all synchronously, like the puppets on a pole maybe. But we still wanted the individual puppet balls to move alone, it seemed impossible.

Another thing I want to know is how the legs seemed so bendy but then there is also a distinct middle "knee like" bend also? How are you going to make that happen?
Re: Eight Balls of Fur! Posted by Gail on Oct 03, 2017
Just had another thought on the shaggier fur. Recent doll maker post by Mozykyto showed how to make wefts of acrylic yard for doll hair in any length. She also has videos on how to color the wefts and then layer them to make rainbow highlights. With that process you could make any color combination in any length you wanted. How to make a Doll Wig with Fringe
Re: Eight Balls of Fur! Posted by 8BallsofFur on Oct 03, 2017
Hey Snail! OK, so for how to control them...after watching the video for Eight Balls of Fur for I dont know how many times, I deduced that it takes just one person per furball. With one hand, you control the body via a rod, and with the other hand you control rods attached to the feet by using a glove. Basically the rods are attached to the index and middle fingers of the glove. Its the only way I've found to get those feet moving right. I've actually done video test of them moving and so far it works good, I can get them to do pretty much all the dancing they do in the music video.

As for the legs...I'm not completely sure how the "knee" bend works. I used a cotton piping to base them on, then handstitched a soft fleece material over it. My guess is to put a bend in the cotton piping by sewing a kink, and leaving the fleece unsewn above it. I'll have to try it on the next furball version. Hey, do you have a pic of those furballs you made? I'd love to see them!
Re: Eight Balls of Fur! Posted by Gail on Oct 03, 2017
No picture of our fur balls, not in my possession now. They were lame looking but the kids were crazy about them because they were different. I showed my grandkids the Eight Balls of Fur video today and they were spell bound. Parts of our song they have to move together then another part independently. Adding a little extra weight on the end of the arms and legs made the springy limbs move more when we wiggled heads, but it was uncontrolled excessive wiggling. The song was Chipmonk speed fast.

I love the glove with rods so that separate fingers can move the legs independently great idea. I forgot that you can work two rods with one hand by crossing them too, but with separate fingers you might have even more control, will have to try that.
Re: Eight Balls of Fur! Posted by 8BallsofFur on Oct 03, 2017
Hey, I bet your furballs were great! Also, do try the glove concept. It works quite well and you get a good amount of control, but use it on your left and control the body with the right. I tried it the other way and my furballs would get kinda cocked over to one side. My left arm is not the best. Really though, being able to move the feet independently of each other and in time with the song is awesome. I think thats part of why I love Eight Balls of Fur so much, the furballs were so unique and moved in ways I didnt think puppets could. That and the music is great!

Speaking of music, I'll also be doing a cover of the song for my project. Thankfully I play piano, drums, bass, guitar...just cant sing very well.
Re: Eight Balls of Fur! Posted by 8BallsofFur on Oct 04, 2017
OMG...I just saw the yarn weft video, I didnt even know you could do that! Thats a great idea, I might try it for a furball and see how shaggy it comes out. It looks perfect for what I had in mind. I like the fur I was using, its really thick and soft, but kinda smooth and the original furballs had shaggier fur like you see in the picture. On that subject of fur, I think I want to use a different fur color for furball #4 since ball #8 was basically the same color. 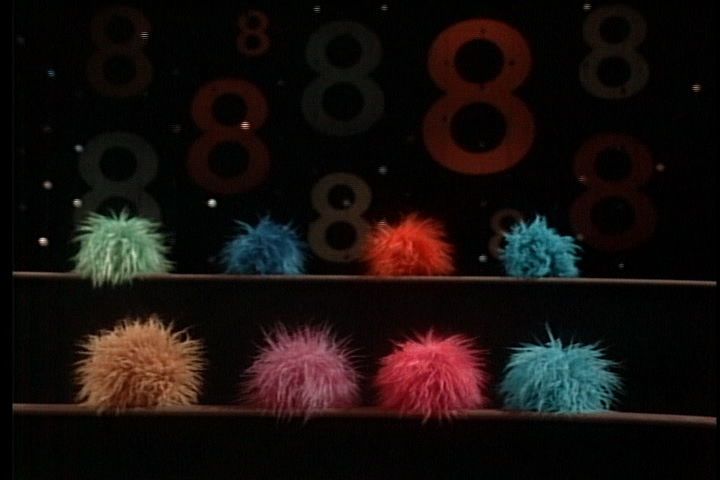 Re: Eight Balls of Fur! Posted by pagestep007 on Oct 04, 2017
Yeah , the same,  Just watched the  wefting  vid.  Never thought of using the hair iron to straighten it. Any attempt I made in the past came out super fluffy.
Re: Eight Balls of Fur! Posted by Gail on Oct 04, 2017
Our fur balls also had big google eyes that had trouble staying on the fur often falling off in mid wiggle. Are the legs going to be all the same stripes" You could vary the patterns on the legs also to give them more individuality like different sock styles.

I expected the original fur balls to be in sinc more but that is very hard to get multiple puppeteers to move the same way without lots and lots of practice. The leg movements reminded me of some of the black light people puppets where there might be two people hidden in black moving legs and mouth separately.

My 4 year old granddaughter wanted to know why he broke the piano. That was one of my favorite parts seeing the keys flying off.
Re: Eight Balls of Fur! Posted by Gail on Oct 04, 2017
I remember a video of Adam Savage making a puppet and in that video I believe they did something to the smooth fur to make it shaggier, I think it was heated.
Adam Savage makes a puppet
Loading