Question of Brazil Puppet Pattern Posted by Anton's Angels on Jan 08, 2014
Hi guys, my name is Anton (from Downunder) and I have a question about the Brazil puppet pattern. I am currently doing a test run on this pattern and if successful I would like to upscale it and use it in a show I am doing.
My question is:
The Brazil design has a crease or pinch just under the eye level. Does anyone know how this is done. I tried contact cement glue on the front and pinching it together. It worked but the glue pulls apart and looks unsightly. Anyone of you awesome creatives know how it is suppose to be achieved. You advice would be greatly appreciated. 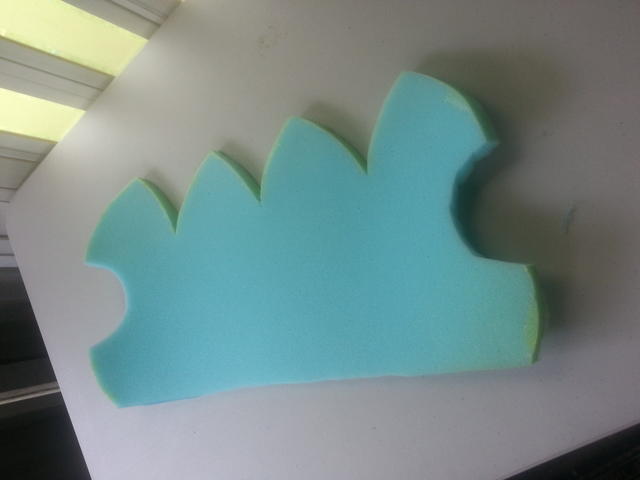 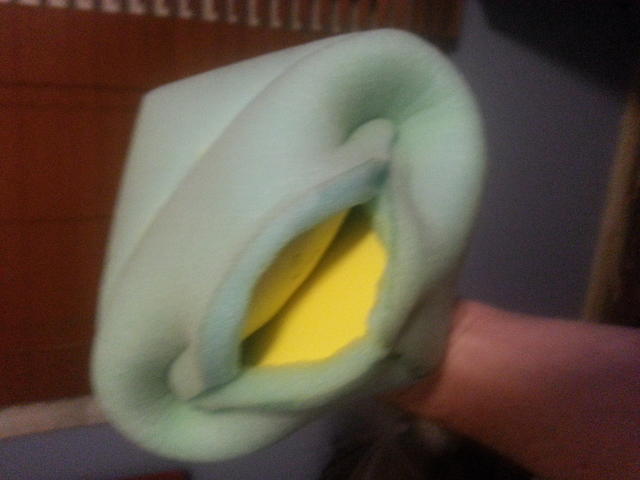 I did find posted here the brazil head pattern (thanks to Billy D Fuller):

On this particular head pattern are small round dots. I think the solution may be to place dots of glue in these positions and then pinch them together rather than a line of glue.

For those interested I am doing a cabaret act singing the Groucho Marx song 'Lydia the Tattooed Lady' and thought it would be great to have a puppet as Lydia (in homage to Kermit's version). I hope to make her out of uncovered pink foam (like the Brazil puppets) so that I can sketch tattoos on her body.

The body will be the interesting part:
Hourglass with large breasts (covered in tassels)
This is a freaky question but has anyone ever designed a large 'behind' for a puppet?

Once again thanks guys.
Re: Question of Brazil Puppet Pattern Posted by Shawn on Jan 09, 2014
Never done a "behind" on a hand in mouth puppet since it does not really show that much but since you are doing cabaret style I can see where it could work. You could start with the wedge pattern that Billy has in his gallery. http://puppetsandstuff.com/community/index.php?action=gallery&g2_itemId=8610 It makes a round ball and what you would kind of want is the two halfs of that ball setting side by side. Actually best to start by taking the pattern and cutting it half so you have a triangle that is rounded off on the two sides. make like six of them to start with and then glue three together and see how the sit against the back of the body and if they create the shape you want of one side of the bum. You might even end up cutting the original pattern in quarters to use to fill out part of one cheek. Does that make sense to you? The only problem with this method if you are not going to use fabric over the foam is that you will see seams. Of course you are going to get that on the boobs also.
Re: Question of Brazil Puppet Pattern Posted by Na on Jan 09, 2014
I haven't tried Parfix before, but my guess is it's not quite right for foam. Shawn or someone else, could you confirm? This is the glue:
http://www.bunnings.com.au/parfix-300g-all-purpose-silicone_p1232674

This is what I use and it is really quite good. It can be painted on (Parfix can't), non-toxic, doesn't smell. It's basically a stronger version of PVA.  You can find it in Spotlight or Riot Art.
http://www.helmar.com.au/index.php?option=com_virtuemart&view=productdetails&virtuemart_product_id=38&virtuemart_category_id=5

Your puppet sounds great! You may be interested in these discussions on doing tattoos.
http://puppetsandstuff.com/community/index.php/topic,7143.0.html
http://puppetsandstuff.com/community/index.php/topic,6551.0.html
Re: Question of Brazil Puppet Pattern Posted by Anton's Angels on Jan 09, 2014
Thanks for your reply Na. That foam glue sounds awesome esp since it dries clear. Will pop into Spotlight and try to find it. Does it go a long way?
BTW the glue I am using is Parfix FastGrip Contact Adhesive from Bunnings. It holds the darts strongly but dries a yellow colour.
I have seen fake tatoo sleeves at the $2 store before will see if I can find anymore.

BTW I found this picture on the Brazilpuppet blog site. 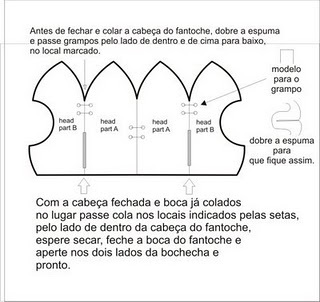 Using google translate (as I dont read Portuguese) it suggests that the creases in the head are made by stapling or inserting a craft wire clip where the dots are. I tried stapling my mock-up and it held quite well and didnt tear apart! 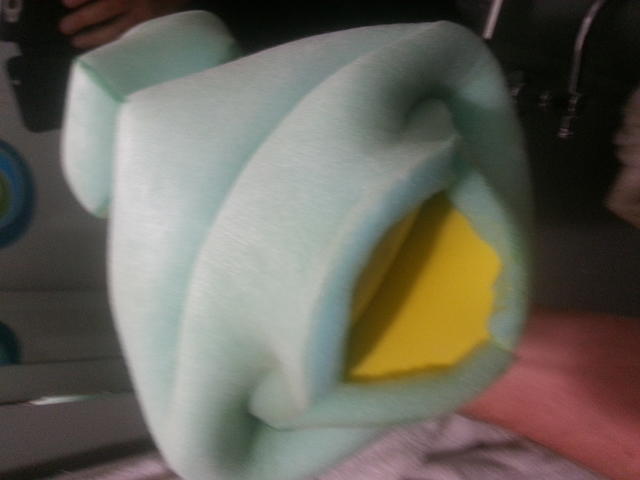 Re: Question of Brazil Puppet Pattern Posted by Shawn on Jan 09, 2014
The adhesive you are using sounds like it should be ok since it is a contact cement. Staples should be fine, if you do find that the foam is tearing some with wear then you could put a small piece of fabric on each side of the foam before you staple. That means that you would have the foam compressed between the two pieces of fabric with the staple on the outside of that "sandwich". Kind of like using a washer with nut and bolts. In fact to make things easy you could most likely glue small round pieces of fabric where the dots are on the foam and then just staple through those layers.
Re: Question of Brazil Puppet Pattern Posted by Na on Jan 09, 2014
Posted by: Neminem on Jan 09, 2014

Thanks for your reply Na. That foam glue sounds awesome esp since it dries clear. Will pop into Spotlight and try to find it. Does it go a long way?

Depends on how much you use at a time, but I suppose one small bottle lasts at least a few puppets. You don't have to use much. One of the reasons why I suggested it is because back in the day when my friends and I were making foam puppets as beginners, we used a contact cement from Bunnings and it not only stank and was toxic, but also dried a horrible brown colour.

You can see an example of the glue is this photo:
www.flickr.com/photos/schoolofpuppetry/6831163788/in/set-72157634760295962
It shows a test between foam glue, hot glue, and Selley's Ultimate (the last being something always recommended from other users here). You can see in the photo, the seam for the foam glue is basically invisible, even clearer than using clear hot glue sticks. By the way, the seam is also flexible, making it easier to cover, hide and bend. I've found that some glues, especially hot glue, make for very stiff seams. This one might be better for you in terms of having naked foam.

I have found though that it's hard to find big bottles of Foam Glue, so you may want to pick up a few at a time if you decide you like it. I know I have about 5-6 small bottles knocking about somewhere. I actually use this as my 'go to' glue, instead of PVA or whatever. So for me it kind of lasts less if only because I tend to use it for things other than foam.

Shawn's right about the staples: best way to prevent foam from ripping is to cover it with fabric. - Don't forget the foam will be moved around and squeezed and pushed based on your use of the puppet. So while it might not rip, if you're worried about things like that it's better to plan ahead than to have to make repairs later.
Loading