Gluing L-200 Posted by andruppets on Feb 26, 2014
How in the world do you glue L-200? I've tried contact cement, and after holding it together for 10 minuets, it still came apart.
Re: Gluing L-200 Posted by Shawn on Feb 26, 2014
What brand of contact cement are you using?  I've never really had any problem with gluing L-200 using Barge or even Weldwood. The only thing I can think is that you are not letting it set up long enough before you press the seams together.  Make sure you let it set at least 10 mins.

You can do what I call "burping"... I know it sounds funny... I apply contact cement to each surface the right away I press the together for a second or two the pull the apart. This creates a stringy mess but I think it helps to make sure each surface has good coverage.  Then let set up for 10 - 15 mins.
Re: Gluing L-200 Posted by Out of the Box Puppets on Feb 26, 2014
I agree. Never had a problem with weldwood contact cement on L200. 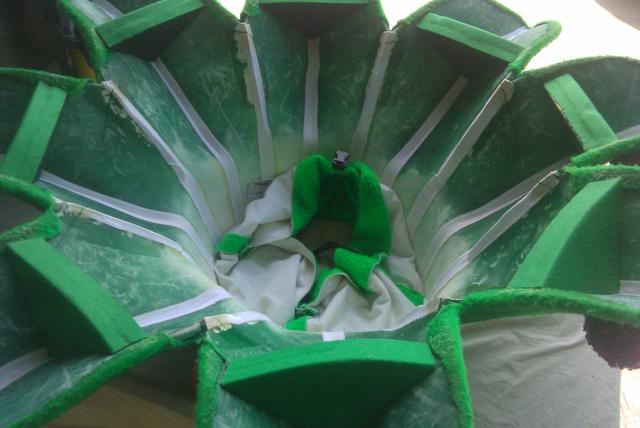 Re: Gluing L-200 Posted by Out of the Box Puppets on Feb 27, 2014
I agree, thickness shouldn't be an issue. I had a life size elephant that was 1" maybe thicker. They used the L-200 just like regular polyfoam for the whole body. Reinforced the seams with white gafers tape, but it held together just fine. I have heard the 'green' version of weldwood doesn't hold as well, but I haven't used it. Temperature is definitely a  factor. That't why we are so behind here. We do all our gluing outside and we've only had 2 days in the past 4-6 weeks where it has been warm and dry enough.  The contact cement needs to be applied to both pieces...unlike most glue where you only apply to one piece. Let it dry until it no longer feels cool. It should be only slightly tacky. Join both pieces. If the air temperature is too cold it will eventually dry, but doesn't cure properly and will split apart.

Julie
Re: Posted by DrPuppet on Feb 27, 2014
1 inch is standard for mascots, now l200 heat gunned together if your glue is giving you trouble. Heat the seams until soft wear gloves and press together.

Sent from my SAMSUNG-SGH-I467 using Tapatalk
Re: Posted by DrPuppet on Feb 27, 2014
Gafer tape is a good idea Julie

Sent from my SAMSUNG-SGH-I467 using Tapatalk
Re: Posted by DrPuppet on Feb 27, 2014
Also heat will separate it until the glue cure so a hot shop or warm house use tape or something for suppirt. Once its covered there is no longer an issue.