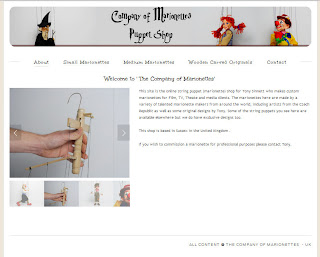 Tony Sinnett was selling upright controllers at one point (see the pic above), he may still sell some although i don't see anything on his website now, maybe worth a try ..although he's in the UK.
www.tonysinnett.com
Re: Controllers Posted by Na on Apr 30, 2014
Posted by: erikawildrick on Apr 29, 2014

Is there someplace to buy marionette controllers without the puppet? I already posted on how I'm making marionettes, and I need to learn to string them properly. But it would make things a lot easier if I could buy pre-made controllers. I don't have a woodshop with saws and such. I'd love to get about ten controllers and just concentrate on making the puppets.Any ideas?

Hmmm, I was going to suggest the Puppeteers of America online shop, but I see it's been closed (temporarily, with no sign of when it will re-open). I bought a control at the market they provided during one of their festivals.

You can try their bulletin board though, and even post your own 'wanted' ad.
Re: Controllers Posted by Jorge on Apr 30, 2014

If you do not find controllers, here you are a diagram for a 9 thread vertical control. You would need a saw and a drill
Re: Controllers Posted by erikawildrick on Apr 30, 2014
Thanks All. I probably need to study some marionettes that are already made and functioning with the various controls , to find a preference. The airplane seems the simplest. A saw and a drill I can buy. The airplane diagram is very helpful. It's a top and side view, right? I looked at some other photos of airplane controllers and they looked fairly cobbled together, like what I did. If I find a couple puppets for sale I can study the controls.This marionette making business is getting more and more interesting, as it seems like making functioning mobiles. Also found the books everyone suggests. Thanks for the info, I'll study the links.
Re: Controllers Posted by Na on Apr 30, 2014
Not sure if it's been mentioned, but David Currell's book on marionettes is excellent. A lot of info there about stringing and controls. The free book on trick marionettes might also be useful:
http://puppetnet.com/trick_marionettes

The biggest problem you might find is that stringing and controls will depend on what each puppet needs to do. No point in adding strings if you don't need the puppet to move its mouth, for instance. This means that copying from other puppets or using pre-made controls might not work entirely in your favour - although still a good starting point.
Re: Controllers Posted by Shawn on Apr 30, 2014
The diagram that Jorge posted is an upright/vertical control not an airplane/horizontal. Just wanted to be clear about that.

I always used airplane controllers and I think maybe they are the easiest to understand.  At the very basic they are two pieces of wood crossed and nailed together. A drill and saw really are the only things you need to get started with horizontal controllers.

At the hardware store ask them to show you where the trim wood is. You should be able to find length of wood in this section for your main and cross pieces. For the removable leg bars I would drill a hole in both the main and the leg bar then at the hobby store in the wood section you can find little wooden pegs. On the main bar I would try to make the hole just big enough that I have to kind of force the peg into it. Put some wood glue around base of peg and glue in. The for your leg bar you can use the same drill bit but then I take a piece of sand paper and roll it up and then "sand" the inside of the hole so that this fits over the peg easily. There is a fine balance where the leg bar stays on the peg but is easy to remove.

Oh and if like me you paint your controls black, don't forget that adds a layer to the peg that will effect the fit of the leg bar.
Re: Controllers Posted by erikawildrick on Apr 30, 2014
I see Jorge DID mention it's a vertical controller, but I failed to see that. Thanks. Work is going OK and I anticipate having enough $$ to by these basic tools of saw and drill. As was mentioned it's probably just as well to make the controller to fit the puppet. Plus, the tools will be needed to make the stage. I really want to make a show. Thanks for the help, and I'm sure there will be more questions as I advance on the project. You've all been extremely helpful.I just want to add that the link to the trick marionettes is GREAT!Gives a lot of insight.Thanks

Looking at the above photo of the vertical controller- reference: the wire used to control the hands.  What kind of wire do most use for this added addition?
I would imagine coat hanger wire would work- however does anyone have a preference?
Re: Controllers Posted by Robert T. on Aug 19, 2015
Hello Shawn- another question in regards to the photo (in the above photo) of the vertical controller; I am having a hard time understanding the top bar (legs (knees). In the photo on the left- is this bar meant to move up/down? In the photo on the right (side profile) describing the same thing- legs (knees) it looks like a curved wire with something placed on it.  Any ideas how this works and what the hook is for?