Building on the Go Posted by Rhoady on May 08, 2014
So I just came back from a lengthy trip to spend time with family and looking at my calendar realized my wife has our summer booked(she is a teacher so apparently wants to enjoy her summer off). On these lengthy trips I tend to get restless after awhile and start to miss my little cluttered work station and projects.

In order to prepare for these upcoming vacations and what-have-yous I want to put together a little travel kit to take with me. Nothing full blown like a sewing machine and a box of fabric but the basic gut work. Just enough to satisfy my building lust.

For example: Say on one such trip I grow restless and find an empty tissue box or a empty paper towel roll or something of such endless possibility. With a little cutting, drawing, elastic here, string there sort of thing I have my own little puppet friend to amuse me.

So I'm thinking if I make a little kit of scissors, some form of adhesive, markers, string, and elastic I should be good to go. Maybe I should include some kind of base material in case usable stuff doesn't present itself although I want to try to keep it at a bare minimum. Anybody have any ideas on other important items to add or even other approaches all together? 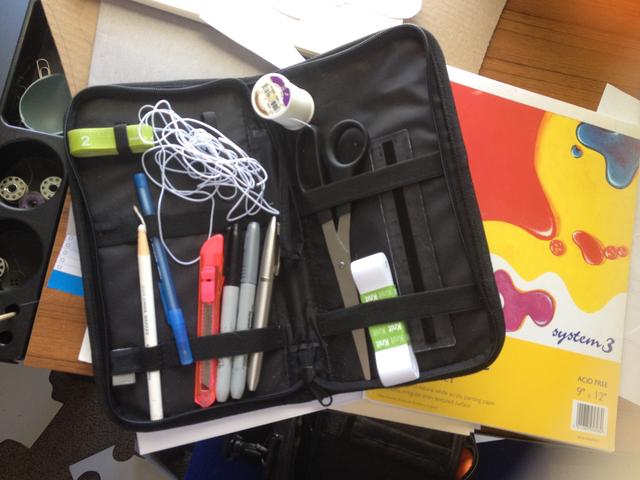 Re: Building on the Go Posted by Na on May 08, 2014
I used to have a post on my site about puppet repair kits, as I used to take one with me to shows. Can't find an easily accessible version of it now...

In the meantime: two things I always take with me on travels. My pocket knife and a charged torch. My pocket knife is a super-duper one, with screw, bottle opener, saw, file, several screwdriver heads, pliers and knife. I find having the pliers around extra-handy, but all the other bits are useful too when traveling. A travel sewing kit is useful too, as it usually has tiny scissors, different threads, needle, etc. I would also add in a small notepad, as you never know when you'll need to write down measurements, ideas, etc.
Re: Building on the Go Posted by Shawn on May 09, 2014
Yea throw a couple small hunks of black or white felt in there. I am a big fan of felt.

Sorry, saw that photo then read this post.  Couldn't resist

I also recently got my hands on this: 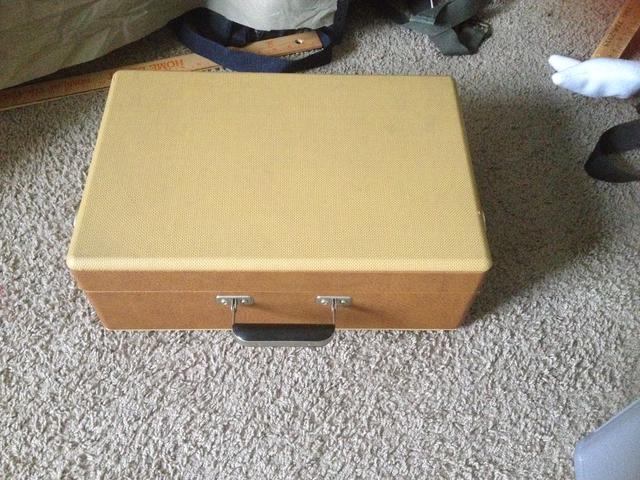 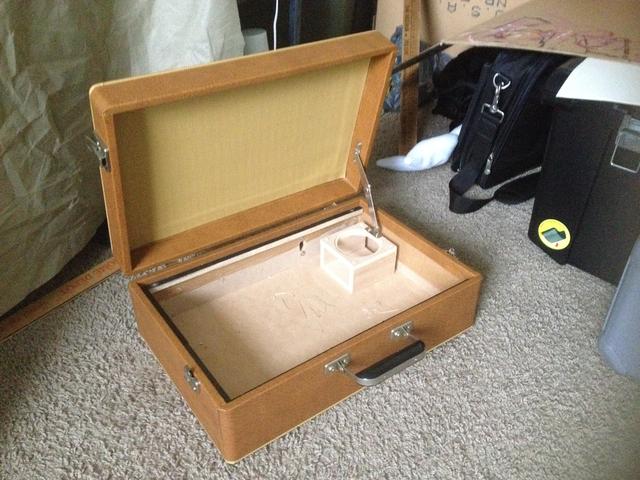 Originally had a record player in it but was broken so I removed it. It's a really nice solid case so worth keeping. Could use it for a larger to go kit but it's to nice to hastily decide what to put in it haha. Plus the box that originally held the speaker doubles as a cup holder!
Re: Building on the Go Posted by Shawn on May 10, 2014
Great case!
Re: Building on the Go Posted by Gail on May 12, 2014
Na is a "charged torch" a flash light? I was thinking welding torch when you said that.

I would take needles and thread, and scratch pads to draw or list ideas before I forgot them. Black sharpie, single blade razor, foam sheet scraps, rubber bands, and safety pins. 3M has some bright colored electric tape in lots of colors that is small size.
Re: Building on the Go Posted by Na on May 13, 2014
Posted by: Snail on May 12, 2014

Na is a "charged torch" a flash light? I was thinking welding torch when you said that.

I would take needles and thread, and scratch pads to draw or list ideas before I forgot them. Black sharpie, single blade razor, foam sheet scraps, rubber bands, and safety pins. 3M has some bright colored electric tape in lots of colors that is small size.

Oh sorry - regional colloquialism I guess. A 'charged torch' is indeed a flash light. I have about 5 of them, and it's always handy to have one on the road. Also spare batteries

I'm not a fan of electrical tape as they often don't stick for very long and tend to leave sticky residue; whereas masking tape is just as cheap, lasts just as long but doesn't leave marks. I tend to use it a lot for my (shadow) puppets. In fact I just bought three rolls the other day just 'in case'.

Something else you might want to consider - a small bottle of glue in a plastic bag. The plastic bag is useful if it leaks. You can often find cheap travel bottles in shops, those would work for glue I think.
Re: Building on the Go Posted by Rhoady on Jun 16, 2014
Just got back from a week trip at the beach. Was paid for by the In-Laws so you wont hear me complaining. I ended up just throwing majority of my work stuff in my fancy case and a small side bag of fabric. Was very unrefined if I do say so myself haha. 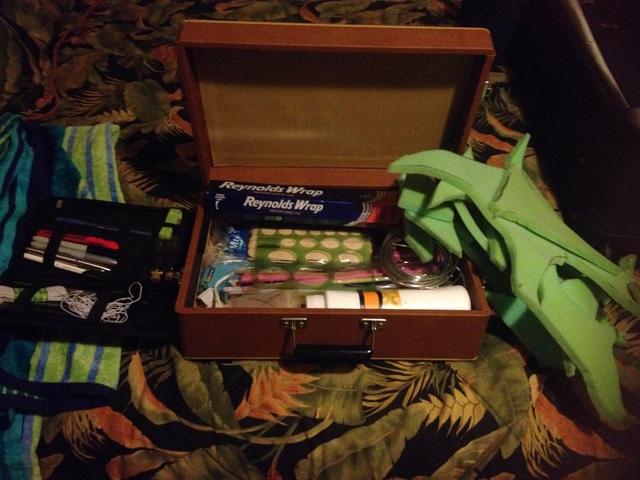 Sure enough as fun as the trip was I did get fidgety and had to build something. Didn't take me too long but I had all I needed to satisfy the building urge. 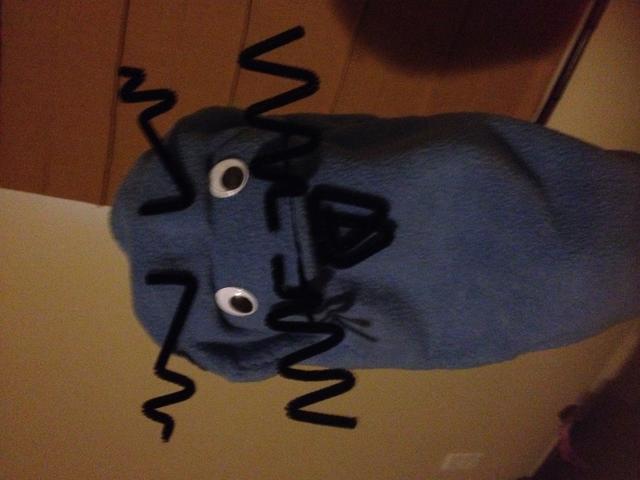 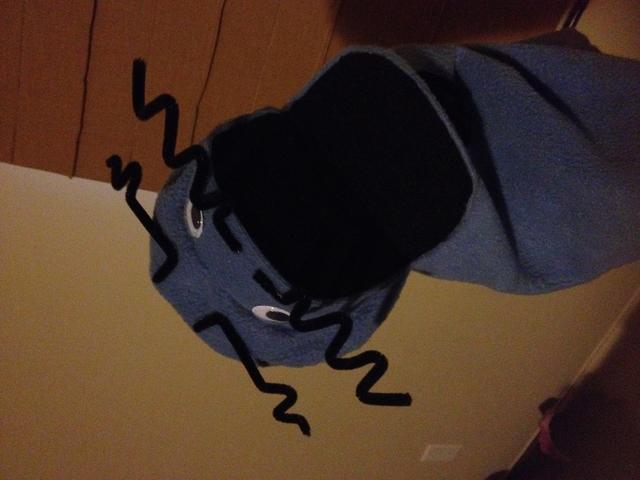 Since I only took scrap pieces of foam I made his mouth out of a piece of beer box cardboard. The stuff the glass bottles come in is pretty darn sturdy.

Our room strangely enough had a window out into the hotel hallway. It was blocked by a thick curtain which further made the window pointless. I was going to make him stare out the window but we were on the 19 floor(20 being the top) so no one ever came by haha.

Overall a fun trip and this little guy got several laughs.