Hoping to Tap Into Your Expertise Posted by itzmichele on Apr 02, 2015
Hi Everyone! I'm new to this site, and I'm hoping your expertise in puppets will help solve a mystery. I rescued this puppet (my profile picture) from a Goodwill here in Los Angeles. He looks like a prop, and perhaps came from a television show? (which would make sense since I found him in Burbank) The makeup on him is fairly heavy, which leads me to think if he was filmed, it was in B/W. No hands on the guy, just a "trench coat" with a whit shirt underneath, and a detective's cap. There's a pole under the coat, and there's a wire running from the back of the mouth, through the pole, down to a mechanism the puppeteer could use to move his bottom lip. He's a good 20" tall, and there's not a mark on him to indicate who made him or where he came from. Ideas? This picture also appears in the Gallery. Thanks!
Re: Hoping to Tap Into Your Expertise Posted by Gail on Apr 03, 2015
Looks like a Pelham vent puppet. It has no hands because your hands are used thru the coat.  Could be old and some are worth some money.  Do Web search and you will learn more.

http://www.pelhampuppets.uk.com/pelham_history.html
Re: Hoping to Tap Into Your Expertise Posted by Gail on Apr 03, 2015
Here is a link with one that looks similar to yours Oogie, from the Uncle Floyd Show

Here is another picture of Oogie his hat is red and he seems to be the style of WALTER VENT
http://www.ppo.co.uk/bimbo/index.php/types-of-puppet/vent-puppet-range/286-walter-vent

Can you tell if the hair is lambs wool or fake fur?  Identification tab in the last link said that in 1971 they changed from lambs wool to fake fur and also earlier ones had not legs but newer ones since 1971 had legs.  Sadly they also say there were knock offs made of their puppets.  They have an email to ask questions.  I wondered if there were variations in the colors of the clothes or if they were all the same?
Re: Hoping to Tap Into Your Expertise Posted by Shawn on Apr 03, 2015
Here is a link to the picture of the puppet in the Gallery.  Gives a closer view if you click on it.  Looks to me like the hair is lambs wool. 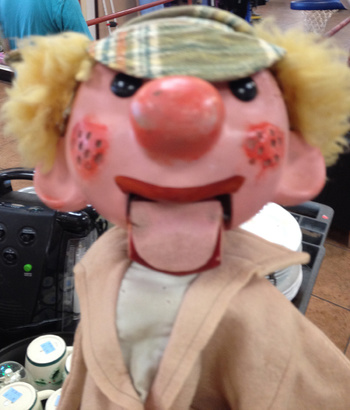 I would say the best bet would be to contact them direct via their email to see if they can confirm.
Re: Hoping to Tap Into Your Expertise Posted by itzmichele on Apr 03, 2015
Hello! OMG thank you SO SO much for answering my post!! I believe his hair is lambswool. It's very course and doesn't move a lot.

I will contact Pelham ASAP. This is such a relief. I knew I'd seen him somewhere!

I haven't heard back from the Pelham folks yet, so for now he sits in a box. Once I have confirmation, he'll be sold on eBay (he "creeps out" my daughter and I've promised to find him a forever home elsewhere!)
Re: Hoping to Tap Into Your Expertise Posted by pagestep007 on Apr 06, 2015
please give Patsy first option.