Newbie Materials Question Posted by Jabba83 on Aug 05, 2016
Hello,
This is my first post… So I hope this is the right section to post this in!

I am currently making a creatures head with a latex outer skin, and am wanting to build a firm under ‘skull’ to stretch the latex over and make the puppeteering  job easier. I also am planning on adding an eye rig, a moveable jaw and air bulbs under the skin to add realistic movement to it.

I’m very new to modelling materials and currently have a strong plaster mold (Crystacl-R) which I have made and used to build the latex cast with and plan on also casting the hard under skull with.

Now comes the job of casting the skull, as the mold is made from plaster, I am unsure as to the best material to use. I thought of possibly using fibreglass or some other kind of resin which would be light in construction but as I don’t have any experience with this I would really appreciate some advice as to the best material to use for this creation! All advice welcome

Thanks,
J
Re: Newbie Materials Question Posted by Shawn on Aug 05, 2016
Well you have a couple options really. First you could go old school and use paper mache'. Believe it or not it can be pretty sturdy.

You would build the layers up inside the plaster mold. Another option that many puppet builders us now is carbon fiber sheets. Goggle it and you'll find a ton of resources. Lastly you could create a 3d model and have it printed. Check out the post by Tioh one of our members here: http://puppetsandstuff.com/community/index.php?action=profile;u=28252;sa=showPosts  He uses 3d printed skull pieces under his puppets.

Welcome to Puppets and Stuff!
Re: Newbie Materials Question Posted by Jabba83 on Aug 06, 2016
Thanks Shawn!

Very helpful indeed, I think I'll go down the carbon fiber sheets route, that seems like the best option for the final design i have. Would never have considered those options before.

Certainly will do guys, I'll post the final results when finished (which might take a while as I'm learning as I go along!

Re: Newbie Materials Question Posted by Jabba83 on Feb 03, 2017
Hi everyone, I said I’d post an update on my monster-head puppet making process.. so here goes..

Thanks to advice on this forum (and being on a budget) I finally settled on using papier mache for the inner hard skull.  When the papier mache finally set, a lot of it stuck to the inside of the mold

The puppet head was used in a short ‘Indiana Jones’ inspired home movie, that I made with my 4yr old son (who played the adventurer of course!). I actually ended up making a few more latex puppets which showed up in the movie for some of the shorter sequences.

Here is the final result in a short clip from the film (the monster enters at 1:00)

Note: Once I can work out how to upload images onto the forum I will post some pictures detailing the creative process behind making the beast's head!!

Re: Newbie Materials Question Posted by Shawn on Feb 04, 2017
Pretty cool! Your son did really well.  Wish I could have seen your puppet better, it was pretty dark on my computer screen but what I could see looked good.

Looking forward to seeing your behind the scenes shots of making the puppet.  Let me know if you have any questions about the Gallery. Should be pretty straight forward. You have to visit the Gallery link once for it to create an album for you then you can upload to that gallery.
Re: Newbie Materials Question Posted by Dr Popet on Feb 04, 2017
I really enjoyed, I love to make videos with my 5 year old son.

Any plans for the future?
Re: Newbie Materials Question Posted by Jabba83 on Feb 05, 2017
Thanks Shaun, yes it does look a little darker on the YouTube version for some reason. I'm not sure why, the DVD version I made came out fine?

Dr Popet, thanks for the compliment. And I'm glad you get to make movies with your son too, it's great fun isn't it! Yes we're already planning out a short sci fi film for the not too distant future, with some weird alien designs to come.


So a quick explanation of how I made the monster's head..

1. It all started with a plasticine sculpt on a flat board, which I hammered old cut up pieces of tin into to form a base for the plaster to be poured onto. 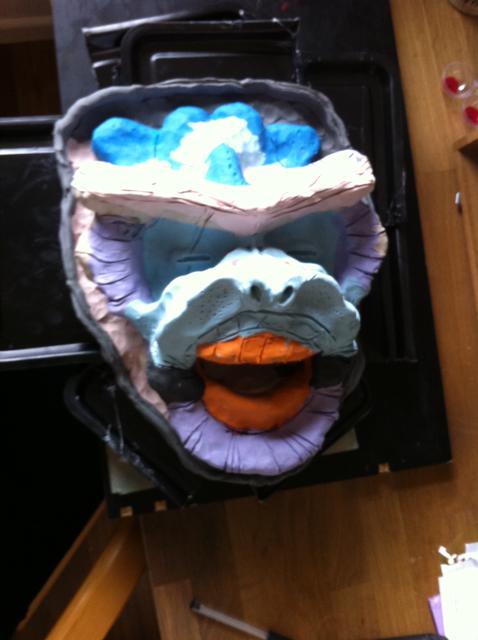 2. I then built up a plasticine wall around the side of the sculpt to catch any leaks and poured about 10 layers of mixed crystacl-r plaster over. Adding layers of burlap for thickness. 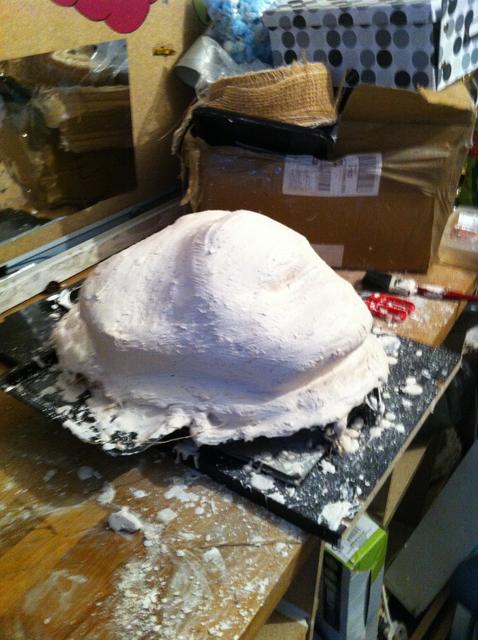 3. Once the final plaster mold was hardened, I pulled the plasticine out and cleaned it up, then painted latex (around 8 layers) on the inside of the finished sculpt. The final latex cast looked like this... 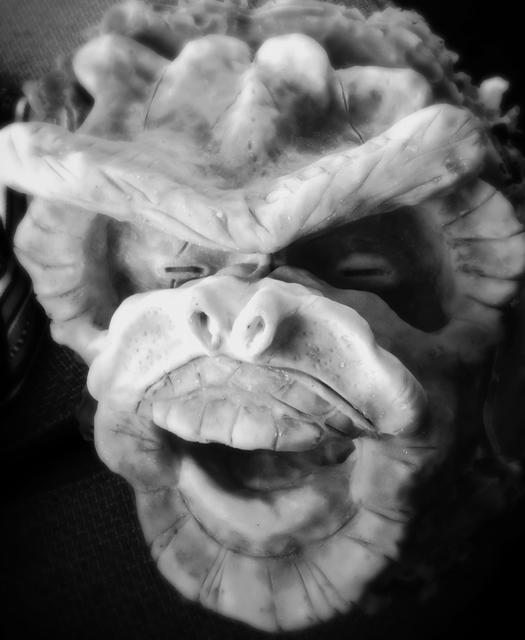 4. The papier mache under-skull was formed from the inside of the plaster mold. As I said before, most of it just stuck to the plaster and was unusable, but I was able to salvage some around the cheekbones and eyes. This was fitted inside the puppet. 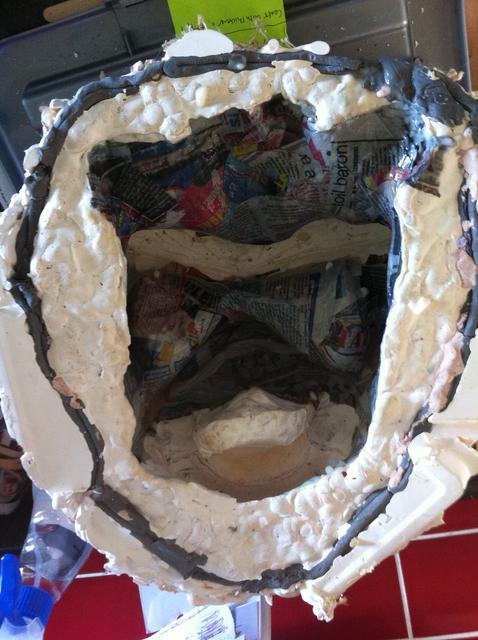 5. Finally I painted (by hand rather than an airbrush which I would have rather used) the puppet with acrylics (mixed in with a small amount of latex).

I made an eye rig using polymer modelling clay. The iris was a printed image (drawn on my computer) cut out and funnelled into the clay, then magic gloss added on top to create a glass looking eyeball. As the eye was made out of hardening polymer clay this allowed me to attach wire to the top-to rotate on the wooden jig and behind to move it manually.

The teeth were also made from the same clay and superglued into the mouth.

Magic gloss was also used for general 'slobber' around the mouth to make the monster's head look more disgusting.. 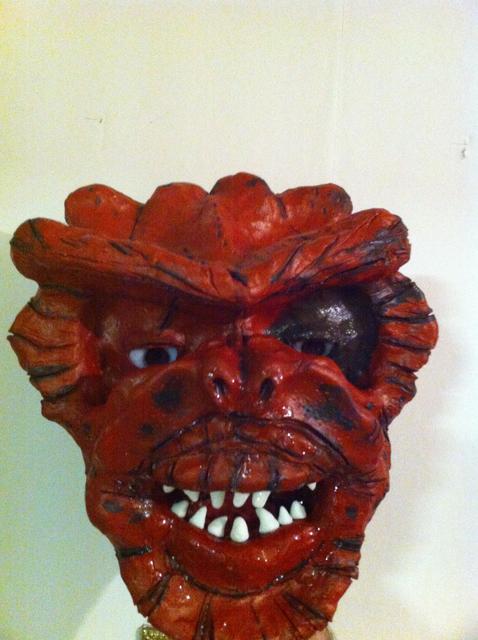 6. For the film, the head was shot in front of a green screen, with a CG body I had made previously on C4D. The head was composited onto the 3D animation for the final result. 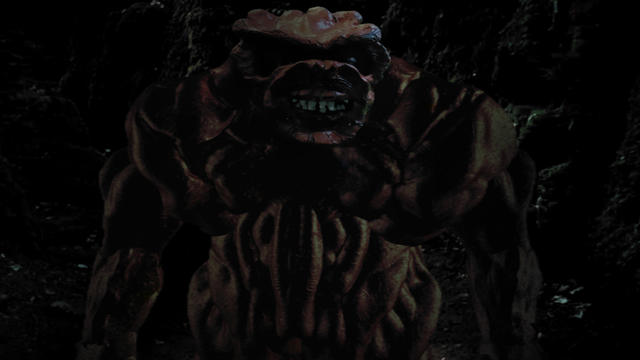 Hope that all makes sense. Any questions please ask!

All in all, several different puppets were created and used to make this film.
Here is a very short clip of a more grisly puppet made for one of the temple traps in the film