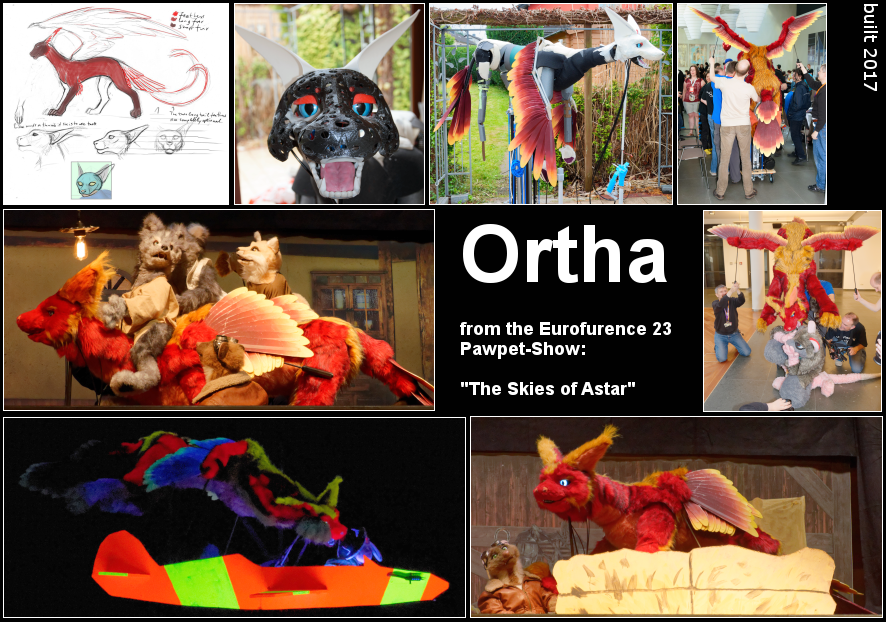 Here are some pictures of Ortha from the Eurofurence 23 puppet show: "The Skies of Astar" (an almost 3-hour amateur live show with took place in the Estrel Hotel, Berlin, Germany, 19th August 2017). She is a giant 4-legged puppet with foldable wings, that is played by 2-6 puppeteers (depending on what features are used). She can be carried by one puppeteer, put on a rolling rig or be lifted by two ropes. It took almost every weekend from January to July 2017 to build her - with usually 2-4 people working on it. I mostly worked on the head - making a 3d-model, 3d-printing it, building all the Bowden cable animatronics. Ortha is about 2.6meters long, weighs 14.98kg.

We made several videos to test the puppet while we made it - here is a playlist: https://www.youtube.com/playlist?list=PLHuH-0GDY9CtekiyRyLQv78YAG02n2xte

Re: Ortha Posted by Shawn on Aug 31, 2017
Amazing puppet! Really pleased  you took the time to document the build process.  Thanks for sharing her with us.
Re: Ortha Posted by Tioh on Sep 01, 2017
I took more pictures. If anybody wants to see more details just tell me.
Loading