Re: Eight Balls of Fur! Posted by 8BallsofFur on Oct 08, 2017
Yeah, I guess if I want to stay true to the original furballs, feathers are out of the question...though, since I'll be putting together a puppet for chrissy too the thought occured to me about how to deal with the hair he's got. I think the yarn weft will do fine though, I made some 5-6" locks and they look and feel great.

Also, did I get alot of fuzz at first? Most definitely! You'll be pulling out a bunch of fluff, but just keep going. it'll stop eventually. As for the yarn I used, I tried two types: Lion Brand "Hometown USA" and Caron Softee. Both get nice results...but, I give the edge to the lion brand. Basically put, use a fat, chunky, and loosely wrapped yarn and you'll get great looking fur. The Caron looks nice too however since its wrapped much tighter its more difficult to brush out and retains a kinkiness no matter what you do. Make some passes with a blow dryer, and that'll eliminate the fluffiness. Check out all four furballs I've made so far to see the difference. The Teal and Yellow are made withe Lion Brand, withe the purple and blue fuzzies made with caron softee. I messed up on the teal furball because I didnt know what to expect and it came out really fluffy. So, with half its fur on, I trimmed its fur down. I ended up finishing it, but it came out looking like it got a bad haircut. 0_o 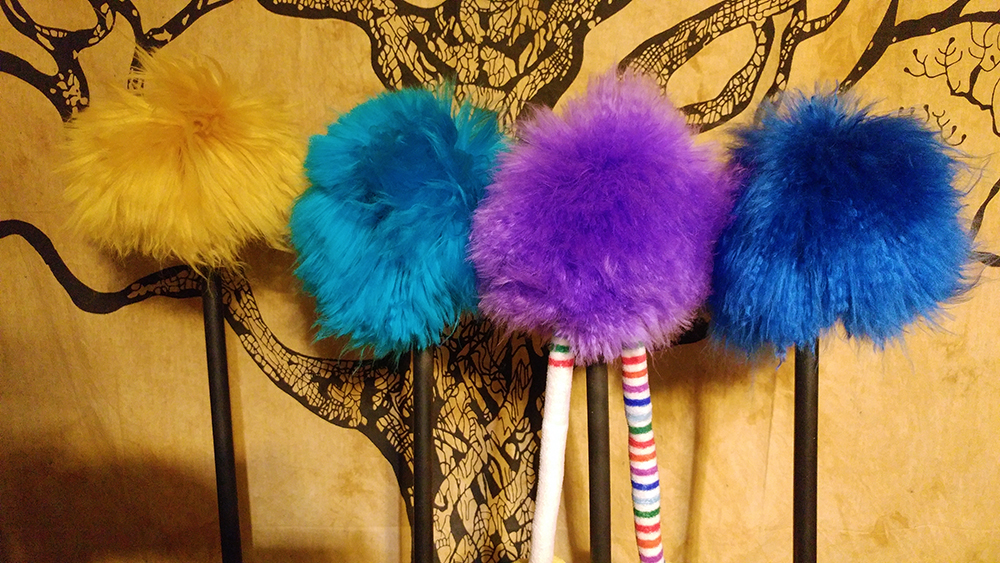 Re: Eight Balls of Fur! Posted by Snail on Oct 08, 2017
Thanks for the tips and pictures, I can see the difference and I want to use the Lion brand. You sure work fast! Those are beautiful colors. I would not be upset over the differences, they would not be noticeable at the distance of a performance and even if they were it is interesting to have some variation. As soon as those legs start moving that will be the focus.

On another note, the piano looks like foam core board.  I recently found tools for cutting foam core on Creative Ministry site Creative Ministry Foamwerks
I had never seen these tools before, but I can see where they would help you make a more professional product.
Re: Eight Balls of Fur! Posted by 8BallsofFur on Oct 08, 2017
You are most welcome. The Lion brand stuff is so awesome...I just finished the yellow furball completely today and its so thick and soft...honestly, it looks like alpaca fur. It has literally the same density and loft as alpaca fur. I'm so excited to make these furballs in that stuff. Now, there is one hitch: The size. When I first began my furballs were about ten inches high. Once I started the wefting, the size of the furball body grew a couple inches Fine, the old legs would still work. The yellow furball body I made today is about 8 inches by itself, and its based on only a 2.75 inch foam ball! So, the new furball, with legs, will probably be in the neighborhood of 16 inches tall. This is gonna be a big furball, and I just hope my feet rood scheme still works at that scale, though it should.

OI almost forgot the piano...thank you for mentioning it and the idea of using foamcore! I just cant quite figure out yet how to make it come apart at the end.
Re: Eight Balls of Fur! Posted by Snail on Oct 09, 2017
I was thinking that you could have it already cut in half and then hold it together with velcro or something that would come apart easily with stress. There is a paper layer and the foam layer so you could cut the foam layer only and then leave the paper uncut. I thought about perforated paper so that it tears easily but I think that would be too much force needed for a puppet to break and it would not be reproducible. It would be best if you can do it over and over. Velco is pretty thick and you would not want a wide gap showing so you might need to cut just the foam to make indention for the velcro and over lap of just paper to cover the gap. That is getting complicated, there is surely a simpler solution.

He is playing the piano pretty hard in every scene so maybe you would want something that would hold it together firmly until the last scene then releases it at the end. Maybe a pull cord that releases the halves only at the end would be simpler and reproducible.
Re: Eight Balls of Fur! Posted by 8BallsofFur on Oct 09, 2017
It looks like in the video the piano is cut in half already, and held together by...I have no idea. I can see the keys are'nt held on by anything and the lid is pulled off by a string. I'll work something out about how to keep it together, though velcro is a good idea. The good news is this performance does'nt have to be live, we can film it! So, I can have a few shots at getting the piano to come apart right. I'll keep working at it.

As for Chrissy, I had a crazy idea...there's another SS song called "Frazzle", and in that one Chrissy makes an appearance as a backup singer...only he's a furry monster. I thought he looks great as a monster, so I was thinking about doing my Chrissy puppet as such. What do you think of that?
Re: Eight Balls of Fur! Posted by Snail on Oct 11, 2017
I like the Monster idea.

For holding the split piano maybe something on the back side of boards, maybe the Velcro could be flat strip across the back seams maybe 2 to 3 inches long. I would think two across the vertical board and 3 connecting the top sides to the vertical might be enough to keep it stable. Then in order to help it release the Velcro in the last scene maybe sew some lightweight long lengths of cord to the top Velcro strips so someone could pull them as one to release the Velcros.  Maybe a mini test sample would help to see what works best.

Another thing to consider in a performance is height. The puppets have to be higher so the puppeteer can be hidden in most cases. So that means the prop has to be higher to match the puppet height. You can use a table for the prop or extensions of wood strips that can be held. If held by extensions the split can be controlled more than just sitting on a table. I find that the staging of a puppet show is often the most work matching puppeteer sizes, puppets, and props.  Just think how quick that little clip was, but how long did they work to make it come off. Most people don't realize how much work puppet performances are, but I think they are worth the trouble.
Re: Eight Balls of Fur! Posted by 8BallsofFur on Oct 11, 2017
Cool, I think I'll go forward with the monster chrissy concept. Should be fun. I haven't done many monster builds, so this will be a cool side project. Also, thank you for the insight on the piano, it helps alot. I'm gonna try velcro, I think it will work. It is amazing to think for a two minute video just how much effort went into it. Not to mention it looks like it was all done in one take to boot. Just crazy. Even the eights in the background, to rig them up to flash in time with the music...thats crazy.

Speaking of music, I wanted to record a cover of Eight Balls of Fur too for my presentation video. I'm almost done recording the song. I can play drums, bass, guitar, piano, so I've got the instrumentation covered....just cant sing worth a darn.

Re: Eight Balls of Fur! Posted by pagestep007 on Oct 12, 2017
Totally agree with you Snail about  how much work goes into a video clip with puppets. People have no idea, but it's such fun.
Re: Eight Balls of Fur! Posted by 8BallsofFur on Oct 13, 2017
Here we are, new furballs just built. I'm really happy with these! They are so furry! I only have three to go, but I'll probably have to order in yarn skeins for those. Now, its onto the legs. I'm gonna try a few styles: A rainbow stripe, a black stripe, ones where the stripe color is the same as the fur. We'll see which turns out best. Hope you guys like them! I also made one image with the 8's in the background, just to give an idea of what the final product may look like. 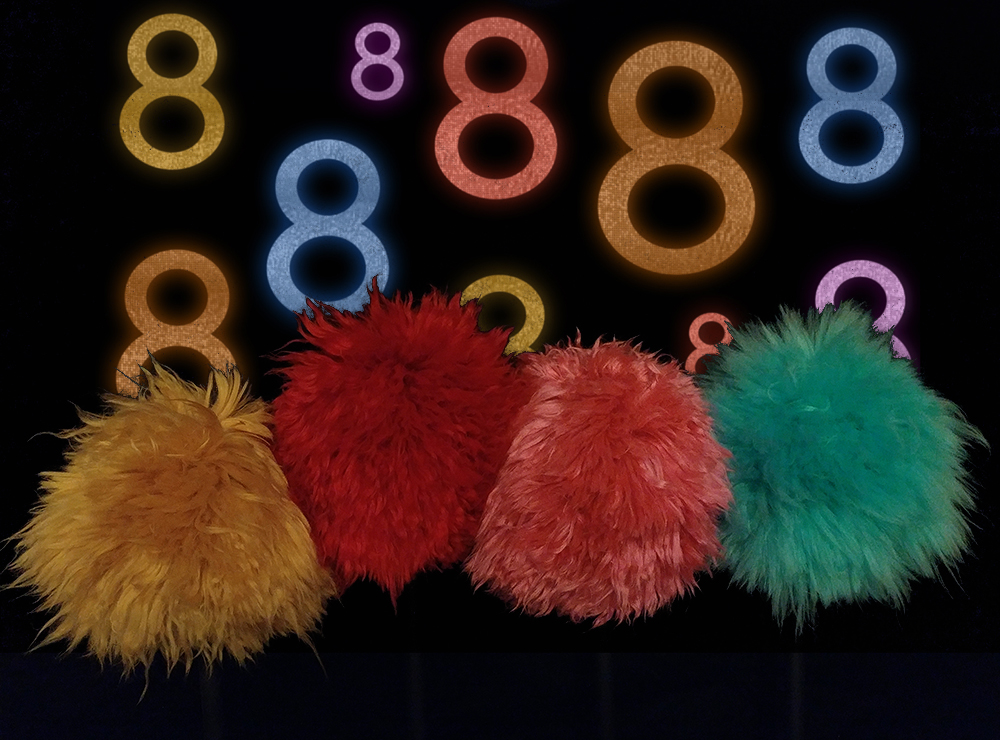 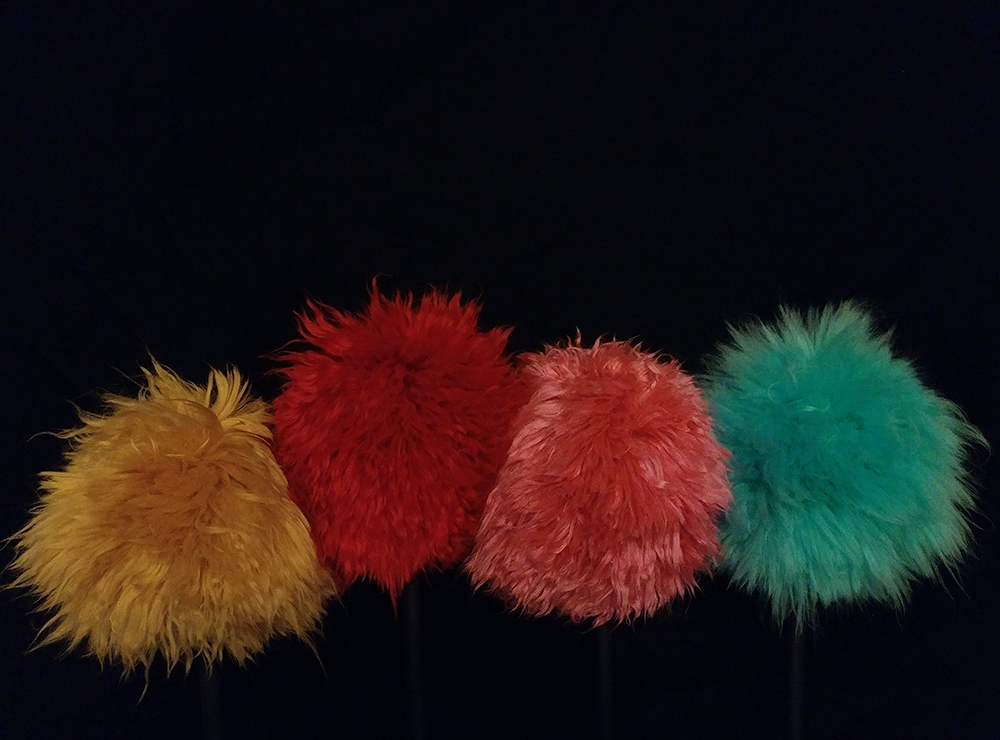 Re: Eight Balls of Fur! Posted by Shawn on Oct 14, 2017
Looking good.  Not sure that legs with black strips are going to read very good since you are going to be filming against a black background, but I could be wrong.
Loading