Small Fry Aquatics- Puppet Videos Posted by TygerMin on Jul 15, 2018
I have launched my YouTube channel where I am building a fish room that will utilize puppets for education and fun.  Took me several tries before I stumbled upon the Project Puppet Forma puppet heads as the base for the upcoming fish puppets. 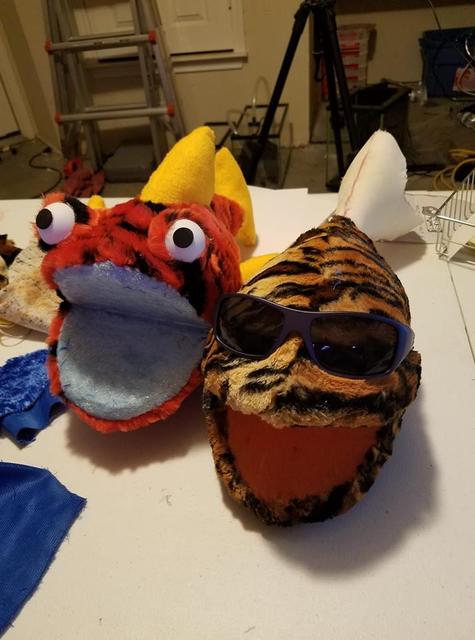 Still working on a few of them before I film something.  I did build an aquarium set, but now leaning on trying green screen instead.  The other puppet I am using is one I created awhile back, Edgaaar the Horrible.  This alien wants to take over the world, but first he wants to one up me and take over my fish room.  He will be at the end of all of my videos plotting against my "stupid" ideas, but he also just launched his own vlog.

I have a lot of work quality wise, especially filming in the garage/fish room.  Couldn't use the lapel mic on this one since my daughter makes an appearance.  Any tips on filming?
Re: Small Fry Aquatics- Puppet Videos Posted by Shawn on Jul 16, 2018
I wasn't able to hear the video since my speakers are on the fritz right now so watched it in silence. I think that effected my feedback here but it may still be valid. I think you could benefit from a change in framing in the first scene. Pull in closer while Edgar is talking the pull back when you daughter enters... of course since you are a one man show it would mean filming in two takes instead of one.

I don't really like things when the switch framing too much but I do think some is needed to keep things interesting. The framing on the second scene was pretty good I thought but lighting was a bit dark.  I imagine the more you film the better the lighting well get simply because you'll figure out the best configuration for each spot.

I love the idea of having a villain for your vids.  I think it'll add something. It could be cool to have him reveal his plan at the end of the vid then in the next one some how show how the plan was foiled. Make the foiling of the plan something kind of subtle... can't think of a good example but for a lame one .... he decides to sprinkle this can of confetti all over the room... next episode a reference is made to how the fish got feed by someone and it was great because the owner had to stay late for a meeting and would have missed the feeding time.  Like I said lame example but hopefully that gives you the idea.

Re: Small Fry Aquatics- Puppet Videos Posted by TygerMin on Jul 16, 2018
That is a great idea!  I was circling something similar, but that gives me more focus.  Might be a good thing sound was off, the echo of a garage is strong.  For some reason, I thought the walls and insulation would help, but I need to find a way to help with sound that doesn't interfere with tank space.  Thanks for the tips on framing and lighting.  I think I will invest in a floor mat, as that concrete is hard on the back, but its the only way to keep my head out of the shot.
Re: Small Fry Aquatics- Puppet Videos Posted by TygerMin on Aug 08, 2018
I attempted green screen with the fish puppets, and introduce a new character in this weeks video.  And...I have a lot of work to do, using iMovie.

Re: Small Fry Aquatics- Puppet Videos Posted by TygerMin on Aug 15, 2018
This week I do a fish room update and mention the ac window unit going out.  So this is Edgaaars end scene...

Re: Small Fry Aquatics- Puppet Videos Posted by The Director on Aug 22, 2018
Great concept. I can give you some youtube advice.  Your banner is most important and your title and what you are about needs to be in the banner. this is what mine looks like https://www.youtube.com/user/Patsyhoolahan/featured?view_as=subscriber.  Your thumbnails should also be more exciting  you can download Canva for free and make a banner and thumbnails.  You can also for free download Tube buddy. Use google chrome.  Your tags are also important in drawing people to your channel  The title of your video should be a tag as well.  I've been tubing for many years but just recently began to learn all this stuff.  you can look like a big youtube even while small.  We love puppets and fish so can't wait to see where your journey takes you.
Re: Small Fry Aquatics- Puppet Videos Posted by The Director on Aug 22, 2018
I also noticed that when you click on your "Home" setting it looks blank.  Your about page is great!
Re: Small Fry Aquatics- Puppet Videos Posted by Shawn on Aug 23, 2018
Those are some great tips Director. Thanks.  Thought I would add a link to Tube Buddy that you mentioned. https://www.tubebuddy.com/  Seems like that would be a very useful tool even if you where just using the free version.
Re: Small Fry Aquatics- Puppet Videos Posted by TygerMin on Aug 24, 2018
Thanks for the tips Director! Fixed the home screen, will be working on the rest this week.  What do you reccomend for thumbnails?  Seems the craze is funny faces, but I also see titles utilized as well.
Loading